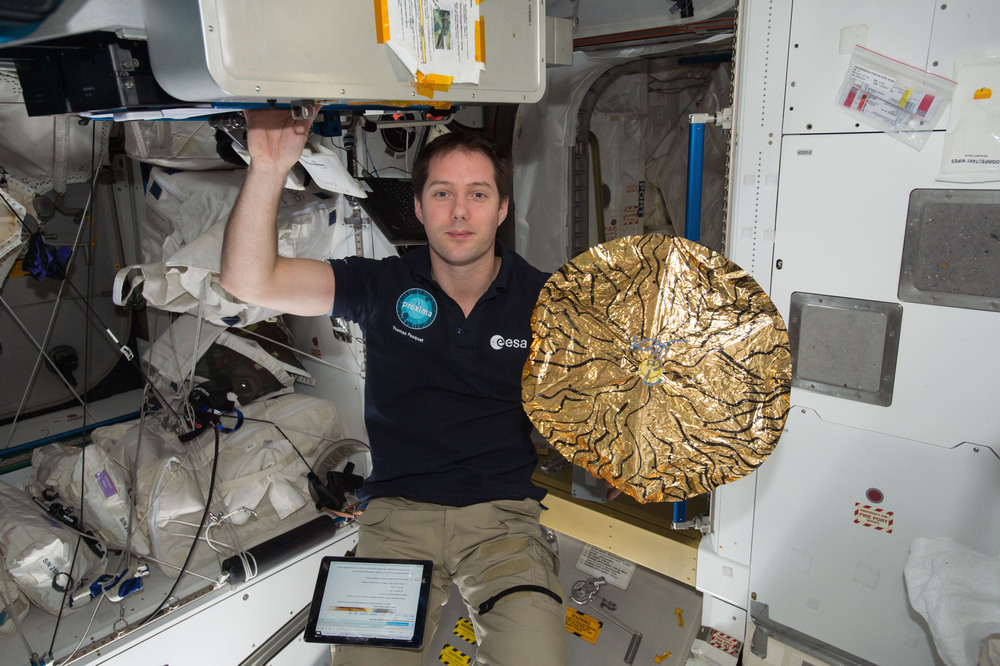 Before sending the sculpture to the moon and deploying it, we decided to carry out a test in Low Earth Orbit, aboard the International Space Station, ISS.  As well as being symbolic and inspiring, the test would demonstrate the performance of the nitinol (shape memory alloy) in microgravity. The nitinol will alllow VITAE to close the coocon during the lunar day and deploy at night only by reacting to the heat of sun.

We delivered the sculpture to the ISS via the Nanoracks ”DreamUp” program.A small box (typically a 10 cm cube with a mass of no more than 1kg) containing the VITAE prototype was transported to the ISS. This milestone called V-III was about testing in microgravity the deployment of the sculpture on the Moon. The experiment was successfully carried out by one of ISS crew member: Thomas Pesquet, ESA French astronaut 🏆!

The Dragon cargo carried about 7 metric tons of cargo in its pressurized compartment. That cargo included supplies for the station’s crew as well as hardware and experiments, including VITAE III.
The Houston-based NanoRacks received the Flight Model VITAE III that successfully passed Electromagnetic Interference tests, and NASA Flight Safety Review.
The Flight Model can be squeezed into a100x100x100mm box.
When deployed, it is around 450mm diameter, and its mass is about 120g.

We set a project goal to create a reliably-deployable sculpture that could expand from 95mm diameter to 450mm diameter.

Shape memory alloy is very flexible when “cold” so it can be compressed into a very small space. Once heated (beyond about 40°C/104°F) it begins to become stiffer, and returns to its original shape.
Heating the prototype on board the ISS to deploy the sculpture was a major challenge. The microgravity environment means that there is no significant convection to help transfer heat. Heat transfer is indeed predominantly done via internal “Joule heating” in the wire, and conduction through the material. Our team, led by VITAE’s technical director, Shaun Whitehead, had to be careful not to have too much heat on the space station and worked hand in hand with NASA engineers to make it success.
This was the first time that a self-deploying, “living” sculpture had been placed in orbit, to our knowledge.

We are thrilled that the European Space Agency astronaut, Thomas Pesquet got to conduct this experiment.

THE VI-TAL PARCHMENT ON ITS WAY TO THE MOON